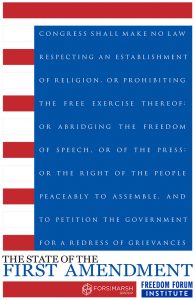 An annual survey of attitudes about the First Amendment found that a vast majority of Americans support the amendment and the freedoms it guarantees. But most Americans who responded to the survey were unaware of what the specific freedoms are. Clearly, we need to emphasize our history more in high school and college.

We are going to help you here in case you get asked about the First Amendment by a pollster. You can confidently tell the survey taker that there are five freedoms, and they are:

— Freedom of the press.

— The right of assembly.

— The right to petition government.

Here is how the First Amendment reads: “Congress shall make no law respecting an establishment of religion, or prohibiting the free exercise thereof; or abridging the freedom of speech, or of the press; or the right of the people peaceably to assemble, and to petition the Government for a redress of grievances.”

Here are some other findings: “This year’s survey revealed that Americans consider fake news more objectionable than hate speech on social media, though both are opposed by large majorities,” the FAC said in a news release. “The survey showed that 83% of respondents agreed that social media companies should remove false information, compared to 72% who agreed such companies should remove hate speech.”

The center said the “good news for First Amendment advocates is that, even with those high levels of concern and desire for action, a majority of Americans do not support the government in having the power to require social media companies to remove objectionable content.”